Sobriety checkpoints:
Sobriety checkpoints are roadblocks that are never disclosed in the area in which they will be setting up the check point.  The check point will involve law enforcement officials stopping every vehicle (or more typically, every nth vehicle) on a public roadway and investigating the possibility that the driver might be too impaired to drive. They are often set up late at night or in the very early morning hours and on weekends, at which time the proportion of impaired drivers tends to be the highest due to drinking all night. Checkpoints are also often set near the exit points of public events, to prevent large numbers of drunk drivers from being released into traffic under the influence from the event. With a portable and quick alcohol breath test, the police can test all drivers (if the law permits), and process the cars one by one as they enter the check point area. When there is no quick test, a more complicated routine is necessary. However upon suspicion, the stopped driver is required to exit the vehicle and take a roadside sobriety test that requires the demonstration of both mental and balance skills. If the officer feels that the driver can not pass the test, it is determined based on his observations during the tests, the driver is then required to take an alcohol breath test (referred to as a Breathalyzer test in the United States). It is important to note that you cannot pass or fail a field sobriety test as they are not “pass-or-fail”, they are only meant to aid the officer in determining if you are impaired based on observations of the subjects performance of these tests.
Being subjected to perform this test is not prohibited by the fourth amendment of the United States Constitution if the law enforcement entity posts or announces in advance that these checkpoints will occur and at what location; law enforcement agencies often post a sign in a small road or street during the weekdays when it is only seen by local residents and not by those attending a special event or those that only travel in that area of the city during the weekend to give notice to the local bars and clubs. These announcements are also found printed in news papers to give further notice. Numerous websites host a database of check points that are to occur based on information found in news papers, the internet and tips from visitors of such sites.  In addition there are also some smartphone apps that include a function to report sobriety checkpoints, show them on a map and use the device’s GPS to alert the driver when a sobriety checkpoint is nearby. Sobriety checkpoints regularly catch much more than just drunk drivers. The identity checks will catch individuals wanted by the police, and DUI often occurs together with other crimes, such as vehicle inspection and registration violations, vehicle tax avoidance or driving without a license. 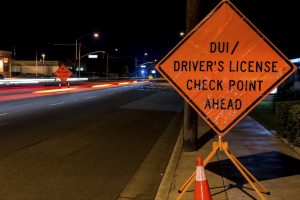